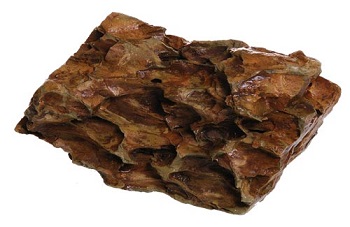 Dragon Stone, also known as Ohko Stone, is a popular aquascaping rock named after it's scale like texture. The natural details and crevices gives your aquascape an aged look that can't be duplicated with artificial decorations. Dragon stone can come with a wide array of colors, ranging for reds, yellows, and browns.

Though many people think dragon stone is artificial, it's actually an all-natural sedimentary rock. Dragon stone contains clay, silt minerals, and organic matter packed together by the action of high-pressure waves.

Unlike alternatives such as limestone or coral rock, dragon stone won't affect the pH of your tank water. It's an inert rock and doesn't shed into the surrounding water. Dragon rock is generally safe to use in any freshwater setup, even with pH-sensitive plants and fish.

It is safe for freshwater tanks